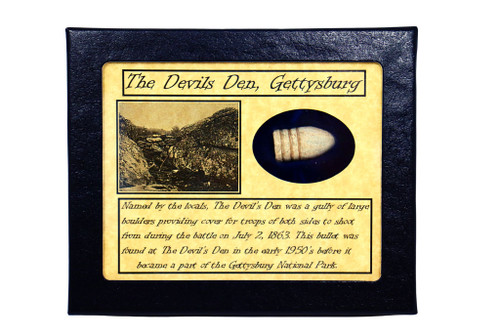 Case states:
Named by the locals, The Devils Den was a gully of large boulders providing cover for troops of both sides to shoot from during the battle on July 2,1863. This bullet was found at The Devil's Den in the early 1950's before it became a part of the Gettysburg National Park.

This case comes in a 4 x 5" matted display case with authentic civil war bullet from The Devils Den in Gettysburg.

Shot Bullet Relic from The Battle of Gettysburg, Pennsylvania with Display Case and COA