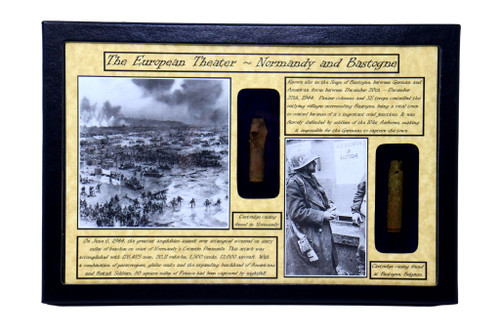 "On June 6, 1944 the greatest amphibian assault occurred on sixty miles of beaches on coast of Normandy's contention Peninsula. This attack was accomplished with 176,475 men, 2,011 vehicles, 1,500 tanks, 12,000 aircraft. With a combination of paratroopers, glider units and the expanding beachhead of Americans and British Soldiers, 80 square miles of France had been captured by nightfall.

Known also as the Siege of Bastogne, between German and American forces between December 20th- December 27th, 1944. Panzer columns and SS troops controlled the out  lying villages surrounding Bastogne, being a vital town to control because of it's important road junctions. It was fiercely defended by soldiers of the 101st Airborne, making it impossible for the Germans to capture the town."

You receive a different casings than pictured. Only presentable casings will be used.

Shot Bullet Relic from the Battle of Chancellorsville, Virginia with Display Case and COA

WW2 Dug American Shot Bullet Casing .30 M1 from The Battle of The Bulge with COA